Skip to primary content
Skip to secondary content
I need a vacation, a Hyper-geometric gate to somewhere on the North Atlantic so I can get some time with my favorite ocean, a sailing cruise that somehow also manages to stay 1 fathom from the rest of the folks on the ship, and a midnight snogging session with a squid girl with tentacles that go all the way up, (or a fish woman with really nice rack of gills). (Deep ones and their hybrids are oddly immune to Covid19. Still vulnerable to gill ick though)

Before you post an article or comment about "Why were the 70's so weird?" just remember. The 70's were weird. End statement. Us GenXs were just as strange as our boomer cohorts. Even the Silent (who rarely were) and Best (a lot were, many weren't) generations got kind of loopy in the 70's.

The 80s were crazy, the 90's smelled funky, the 00s were ought of their flippin' minds, the 10s (2, electric boogaloo) were bizarro and the new 20's well...are a series of homicidal maniacs knocking on the door.

(for the non-Latin reading folks)

There is a new king in Carcosa. Salute the King in Yellow, the Ruler of the Black Stars, the favored of Kassoghta. May his rule be eternal.

Got the keys to Dunwich Abbey 3 months ago. I've also been in hermit mode for 34 days. Not much has changed, I've made a smidge of progress on book organizing, I've dealt with work foo, the post migration foo has been catching up with everything else. Had to drive to the office twice and the datacenter twice this week, mostly due to a lack of communication. I took Monday off because I seriously just didn't care to talk to anyone, I'm also taking tomorrow off for a similar reason...but not completely.

Tomorrow is the anniversary of Mom's passing. It's been five years, seems like it was just the other day. I'm probably going to be ok, but I think this is the worst time to take a gamble on that, and to deal with some really frustrating meetings. So I'll try to decompress some, have a good cry or two if the spirits move me, then back to the looney bin on Friday.

Oh, I officially found out today I am not currently running a fever. Went for allergy shots today, and since my doc's office is attached to a hospital, I had to get my temp taken. Normal. Doctor's staff did it again, also normal. So that hopefully will shut up my hypochondriac limbic system. Otherwise it's the same, random coughing fits when the phlegm runs.

So long story short, not much has changed in the last few months, other than kind of getting used to the new place, and the new town. And the big changes/additions/etc require help, and that violates the whole social distancing thing. But eventually it will work out. Until then, I'll keep tentacling along.

Spent the weekend working the migration. Not as bad as I thought it was going to be, but not as good as it could have been. Anxiety levels were stupid high the entire time. Worked with audiobooks, mostly HPL and MR James stories, with a few podcasts on the side. Clocked 26 hours over the last two days, on top of the work week. Technically I'm still on the clock, but when it clocks after 2000 I'm heading to bed and meds. Maybe a little book time. Very little.

So what's next? Monday and possibly Tuesday will be kind of crazy with support requests and reminding people to read their darn email. I'm hoping to take a day or two off as comp time. I put off a bunch of stuff because I knew the weekend was going to be hard. Computer stuff, work around the apartment. Convincing the neighborhood crows that I'm their friend. Maybe even making myself disconnect for a few hours and read.

So the stressor is done, for now. (Beyond the rest of the stressors). Dear Cthulhu and Tsathoggua, please grant me some restful sleep.

Quick post, so I can have a record. Not much has changed. I've managed to not get sick, anxiety is a bit higher. It doesn't help that this weekend is the Big Migration (TM). I worked a half day today, mostly. Been hovering waiting for..."something" about it. The fact there's been almost radio silence isn't doing much for my anxiety. I guess I wing it. I'm not starting my side of things til tomorrow morning, and going to try to crash at the usual time. Hopefully tomorrow isn't too long, and Sunday's testing goes smoothly. Monday and Tuesday are probably troubleshooting unexpected stuff. I'll probably take a PTO day or two this next week, because I doubt I'll destress any this weekend.

Big store run today, wasn't too crazy, and I managed to find almost all I wanted/needed. Also got my happy pills. Hopefully I won't have to go to the store again for at least a week. Not much else to say. Hope no one's gone too round the twist, and I'll talk another time.

State of the fox. I've been effectively isolated/quarantined/hermited for two weeks. Haven't seen a friend in that time, and maybe exchanged words with less than 10 people face2face. I don't recall ever being 'alone' for this long. Even when I was homebound with Stan the Flesh-eating Bacteria, I saw people at least a couple times a week. I'm not the most social person, but I'm more than a little twitchy. I'm glad Dunwich Abbey is fairly large, I can pace better.

Work is still frustrating, not going into details because I'd start full bore ranting right quick. *looks back* Oh yeah, they started the office closing the Monday after, and that week was crazy with WFH folks getting things set up. I'm special, I was already working from home, and I'm getting a note from Carcosa Corp saying I'm that special kind of employee who can travel to work sites during all this. I'm always so lucky *wink*

Personal/health foo is about as you'd expect. My allergies constantly twig me out til I remind myself that the only thing different than any other season is there's a crazy virus out there. Stupid cough. Mental health is all over the place. Not much focus, easily anxious, had my first full on panic attack...some days ago, can't remember exactly when to be honest. Yeah, that's disconcerting. I've been able to get out of bed, get a shower, eat every day...so my depression isn't as high as it can be. Sleep is mixed, not a lot of anxiety dreams thank Tsathoggua. I'm not reading a lot, though I'm listening to a bunch of audiobook/podcast stuff. I'm probably a little too hooked on the internet during this mess. But, when I try to ignore it, well...see the above about anxiety. So I don't really know what I'm going to do.

So yeah, that's about it. I should do work around Dunwich Abbey, but I have little energy most days. We'll see. At least I'm mostly keeping up around the house. We'll see what happens.

Tomorrow will be my second calendar month here in Dunwich Abbey. It's also the middle of the Covid-19 virus outbreak. Not, as I've been typing, 'Corvid'. It's not a crow. So far I'm fine, I'm low risk, even with the diabetes and high blood pressure. I'm not being stupid though. And I have plenty of toilet paper, I bought a bulk pack when I moved in, and well... I live alone, so I have plenty.

Carcosa Corp is all kinds of busy, projects and migrations and everyone is twitchy. There's no official word about office closings and whatnot, but I've been mostly working from home anyway. So we'll see what happens.

Personal foo? Been slowly working on getting Dunwich Abbey setup. Not as fast as I'd like, but I've been pretty lacking in tentacles post work, and I spend most of the weekend trying to recover. I've managed to get the study to be pretty comfortable, and the bedroom is coming together. The living room is still a bunch of boxes and stuff. I need to get more bookshelves so I can start organizing books better, but that's going to wait life to settle down again, vs having random folks over here in case of plague. Plus the next weekend or two will be busy with work foo. I'll get around to it sooner or later.

Ok, I'm out of stuff to talk about, and I'm bloody exhausted. Night folks who read this.

All praise to thee, Tsathoggua, dark lord of darksome realms! Before thine ebon throne lost wraiths bewail their fate with many an echoing groan and wander sightless through the frightful glooms of sub-Eiglophian caves. Thou didst reward their unrepented insolence displayed before thy toadlike templed eidolons, with monstrous dooms. From them thy vengeance was not stayed, nor shall their horrid punishments abate ‘till all the peaks of high Voormithadreth are ground to grit in icy eschatons.

Oh lord of foulsome life and fearsome death, to thee our fealty repays our gift of necromantic arts with offerings of red and pulsing hearts given in thanks on thine ensanguined alter; and, to avenge all crass impiety, our serpent-venomed dirks will never falter.

Now hear our plea, O Lord of black encaverned spaces, whose jet-dark orbs, though night-enmired yet see into all secret subterranean places, and whose black-furred bat-supple ears detect the faintest sound of all who plot in chambers underground: Fulfill our hopes allay our direst fears. Grant us the gift of swift nocturnal stealth: Reveal to us each hidden jeweled hoard of kingly wealth; and most of all Dark Lord, possess our foes with terrors thanatopic and draw their shrieking souls down from the light into eternal night to pine for aye in silence nyctalopic.

From the Book of Eibon, Psalms of the Silent. Translated by Richard L. Tierney. 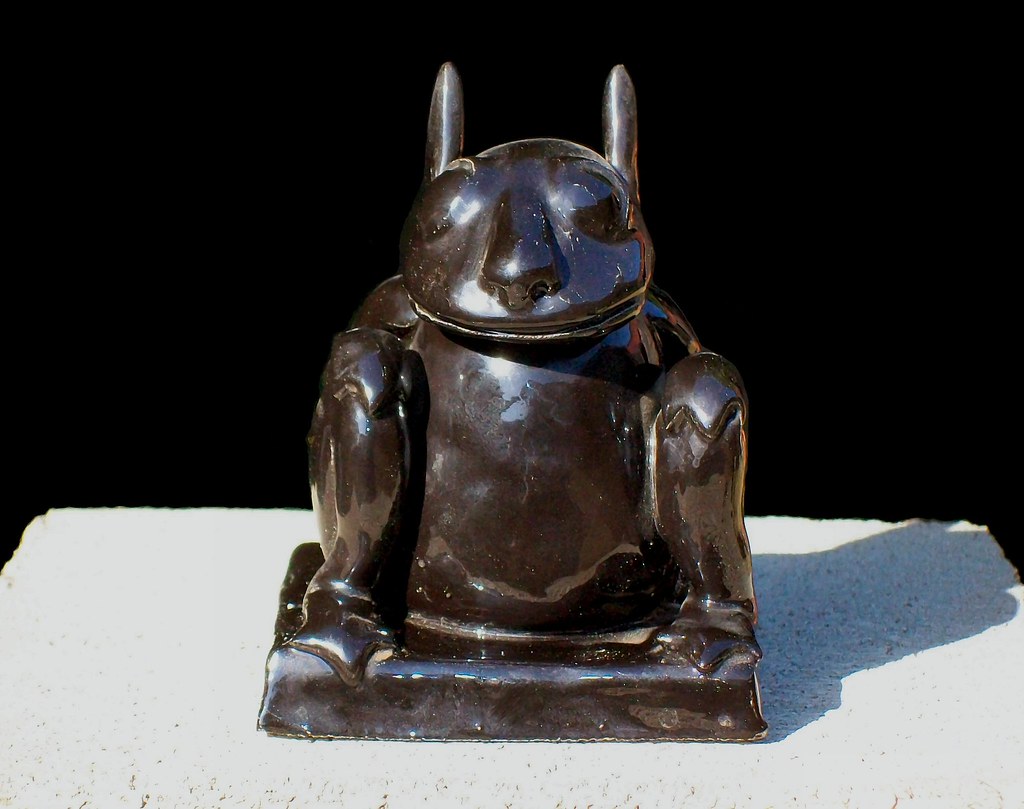 Engish:
To the Sea, to the Sea! The white gulls are crying,
The wind is blowing, and the white foam is flying.
West, west away, the round sun is falling.
Grey ship, grey ship, do you hear them calling,
The voices of my people that have gone before me?
I will leave, I will leave the woods that bore me;
For our days are ending and our years failing.
I will pass the wide waters lonely sailing.
Long are the waves on the Last Shore falling,
Sweet are the voices in the Lost Isle calling,
In Eressëa, in Elvenhome that no man can discover,
Where the leaves fall not: land of my people for ever!

Rest in peace my sister.