Not doing so good. One of my best friends, the person who I think of as my little sister, has been in the hospital since before I got sick. Today I got a message from her husband that I need to be back up at the hospital ASAP. Not going into detail, but her lungs are failing, and there isn't any options to correct it. Either her body finds a way to heal itself, or she doesn't recover. Was up at the hospital, emotions pretty well locked in a box whenever I was around people. Got people talking about other things, or listened to them when they talked sad. What I'm good at. I learned how to compartmentalize emotions when Dad was in hospice. I also learned to not keep the box closed too long. So when I felt the end of my rope, I said my goodbyes and came home. Got myself into a shower, had a good cry, and have been distracting myself since.

So what's next? No idea, that's up to things so far outside of my control it's not funny. So it's one day at a time, one tentacle in front of another, and making sure I take care of myself. Tomorrow, unless I need to be else where, will probably be doing the tasks I dropped today. Then work, which I'll have to really work at focusing to get a project with a short time frame done and out the door. Then it's Thanksgiving, which to be honest ATM I'm not very thankful for much. Then the project implementation for work, then probably a holiday change freeze., which I'll have to spend catching up on a lot of other stuff, plus moving prep and Cthulhumas.

Oh, this version of my blog will be going away at some point. Wordpress is too cumbersome for how I want to blog, so unless I think of a better option, I think I'll be going back to using Livejournal and importing that feed into the Innsmouth website, like I did years ago on Cabal23.net. The LJ API hasn't changed much, and I can still use an ancient perl script I have to log in and post. And frankly, the worries we all had about Soviet LJ seem to be tiny all things considered. None of the content will vanish, because I cross posted most everything to LJ since I started on Wordpress. We'll see how it works out. But for now, back to tuning out and watching comfort movies.

"When asked what advantage he found in serving Tsathoggua the sleeping god, Eibon replied 'Rather I would believe in a god that sleepeth than that the travails of the world should be the will of a waking providence"

The Book of Eibon, the Apophthegmata of Eibon, verse 17
Leaving for the HP Lovecraft Film Festival in a few hours, and coming back Sunday day. So pretty much just a flying visit to Innsmouth West. But I'll get my pilgrimage to Powell's Books, and see the big films I want to see. Topping the list is the Richard Stanley & Nicholas Cage production of 'The Color Out of Space', on a really big screen. I'll also get to hang out with a few hundred cool cultists. As usual I'm majorly wound up over the traveling part. TSA and flying are both stressful to me, even with me signing up for the TSA EZCheck or whatever it's called. Hopefully it's as easy as it's name. I also have to get through 3 meetings in my 4 hour shift today, one of which shall be an utter pain in the rump. But at 1500 CDT, I'll be up in the air, Junior Byakhee. So see you all when I get back.

Flew back in from Providence yesterday. I had a really good time, and I’ll try to post about it this weekend. I’m tired, and I miss Providence already, but it’s kind of good to be home. Catch you all later.

Ok, most of the internet isn't broken today, just mostly Facebook here at Château Innsmouth. But it sounded like a good subject. Because, I'm honestly not doing so hot. Strap in, this will probably be long.

First, a friend of mine had a major heart attack the other night, he's in critical care as they try to get him stable enough for surgery. We met online, fellow weird bookhounds, and I got to meet him in person last year in Providence. So I'm more than a little worried about him. If you could spare prayers/good thoughts/whatever for a friend of mine, I would appreciate it.

Second, the apartment complex Château Innsmouth is currently in is going through crazy levels of change. Last Friday I left home for lunch, and by the time I got back there were new signs up with a new complex name. Later on that afternoon I got a note in my door about how we've been bought, and stuff will change, but we'll like it. So far we've been giving a new website that fails to load correctly, an email about how to setup autopay, where autopay doesn't work, so yesterday I walked over with my checkbook. I had to wait in line to pay, because there were issues with everyone's rent, seems those not on autopay/email notification got screwed up rent amounts. But when they pulled me up on their system, it was the correct amount, so they got a check. Was also told about all the 'Great changes' coming to the apartments. Please Cthulhu, let them ignore me til my lease is up. Everything is pointed to them trying to turn this into 'luxury' or 'premium' apartments, when this is just a middle of the road place to live. Glad I already planned to move.

Third, My anxiety is really bloody high. Tomorrow is a day off, but it's also a stressful day (fireworks while pretty, are loud...and I live less than a mile from where my town launches them). I think I'm hooking up my white noise generator to an amp, or I'll be up later than planned. I'm working Friday, but from home. I've got a lot of stuff to do, I should have worked the full shift today, but when they said 'down tools at 2pm' I didn't argue. So Friday I'm hoping I'll be mostly left alone and able to focus on my projects. We'll see.

On the plus side, I have over 36 hours of down time, I have food, I have books, I have movies. And I have no where I physically have to be til Saturday afternoon (assuming nothing requires me to go to the office or datacenter). I'm going to see the new Spider-Man flick with friends, which I'm vaguely dreading, i finally got around to watching the first one, and I had to fast forward...a lot. I don't do embarrassment well, and a 15 year old superhero who wants to prove himself is going to be full of embarrassment. Hopefully a couple of years will settle things a bit. But I really prefer my superheroes to be at least old enough to drink. But on the other tentacle, the actor really gets the attitude of Spider-man in the action scenes. And I really want to see the credits scenes. I'm really hoping for a clue as to the next set of MCU flicks.

And in the time it's taken me to write this, it looks like the internet has been fixed. I'm dragging tired. I may make it an early night tonight. Well early for not having to get up tomorrow for work. Time to finish this post though. Ciao.

Myself, and all the inhabitants of Innsmouth and Y'ha-nthlei wish everyone a happy Winter Tide. Be social, be solitary, be squamous, and here's to all of us nuts having a better time of things. *raises a Shoggoth's Olde Peculiar in salute*
Sudden realization...remember that job foo I played close to my vest? I never actually said what the news was. New company that bought Carcosa Corp, and didn't bring me on in August, is bringing me on end of December. Same title, same basic benefits and salary, probably more work, but I keep working with the same bunch of yabbos that I enjoy. Even if some of them make me want to LART. Sorry that I forgot, I've been wanting offer in hand before I said anything...but such things don't really exist anymore, and I'm a forgetful fox.

Going to start this off with the news. Unless my blood work comes back with something really oddball, I'm officially a diabetic. Over the last month or so I've been feeling I number of classic symptoms, thirst, unexpected weight loss without changing things, increased appetite, etc. So I went to the doc in the box today, and after some fun and games with getting my blood drawn, the blood stick says I have high blood sugar. Way high. So, the plan for now is to treat with meds, adjust my diet and activity levels, monitor my sugar levels for a month, then see where I am.

In real life terms what does this mean? Well cutting out my Code Red addiction, plus pretty much any other soft drinks. (I hate the taste of artificial sweeteners in soda, so diet is probably not going to be an option). Also, I need to shift my general diet over. Given I live on a pasta, this also will be tricky as heck. I'll also need to start exercising. Which should also be a bit of a trick. Oh well, I've needed to make a change, and this should be good inspiration.

So, that's what's new here in Vulpine land. Wish me luck and willpower, I'm going to need it. 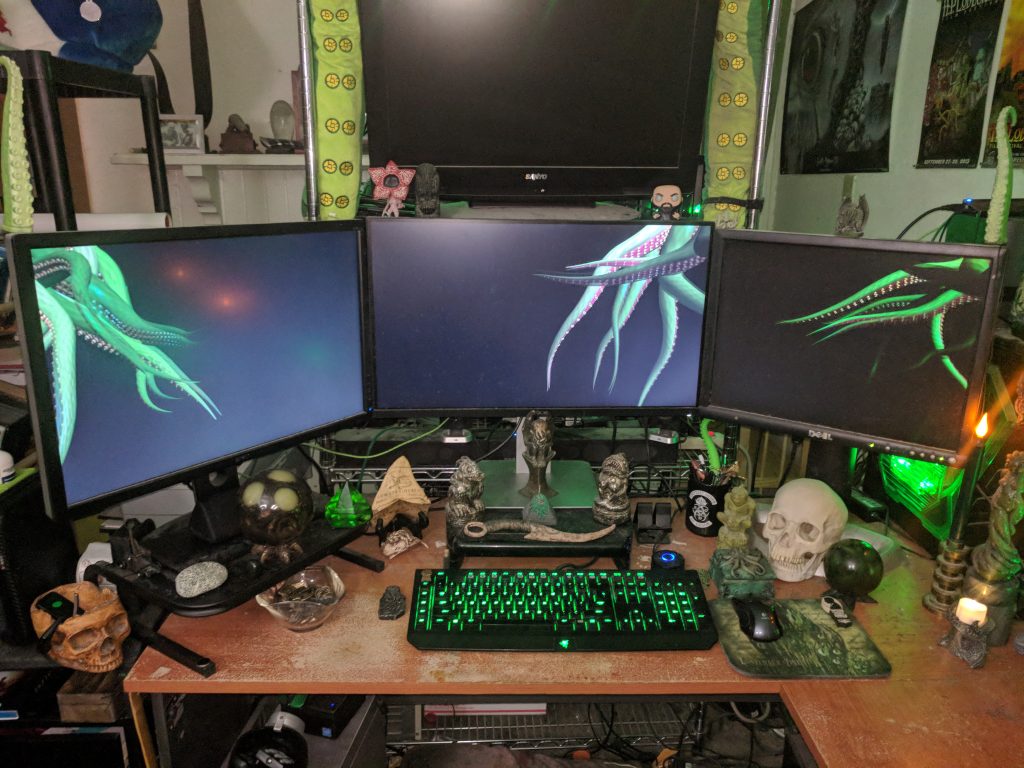 Had the extractions this morning. Sedation dentistry is my friend, I blinked and I went from getting wired up, to getting ready to leave. Eating a ton of soft food, pudding, jello, and yogurt. Wanting sushi, Italian food and gyros. None of which are a good choice right now. In some discomfort/pain, but not bad. Not feeling too loopy from the sedation either, but avoiding pushing that in any form or fashion. Plan is to work from home tomorrow, and possibly Friday. Now lets hope I heal quickly and without issue.